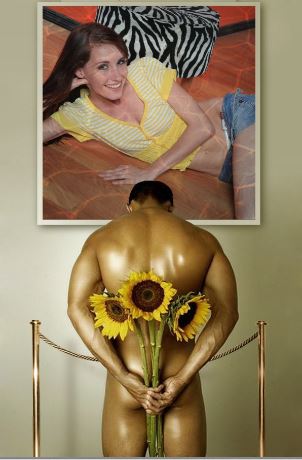 For Femme Dommes: Training Your Pet With the Chorography of  Domination

Inspect: Basic slave position leaving the sub-pup open for full inspection in which the male slave – nude – stands at attention, legs spread, up on his toes  (tip-toes if being punished for ornery behavior),  with hands-behind-his-head. This position provides his Femme Owner with exclusive access to the slave. He can be trotted around and literally kept on his toes to makes him sweat and  keep him aware of his place on the totem.

Nadu/Resting Position: Some femdommes actually call this the “Gor” heehee) Pet should be kneeling, posture  straight while sitting back on heels. Think of the legs being spread out into a “V” with the weight being supported on the tailbone and feet. Hands/palms should be free and at the ready for presenting implements as instructed by the Mistress.

Good Pet/Greet:  Position with hands behind back or clasped in front. Legs spread so genitals are exposed. Downcast eyes but head up to await commands. This would be how a subbie slave would stand upon the arrival/seeing the Mistress entering the room.

X = Lying down in the spread eagle position

Being cuffed, collared, gaged, cock-locked and/or blindfolded adds not just more of a challenge but also disorients the subbie so that he feels properly controlled on a deep level.

These are just a few samples and my personal takes on common stances…I have been actively adding to my personal subbie stance-dance that I make some of my select  my pets learn and adhere to in a game not unlike “Simon Says” called “Mistress May I?”.  Some other faves are: At My Heels/, Strap & Slap Stand, Clasped & Clenched, OTT, Adoration Stance, Balls to the Wall, Halt, and Pussyfoot Punishment.